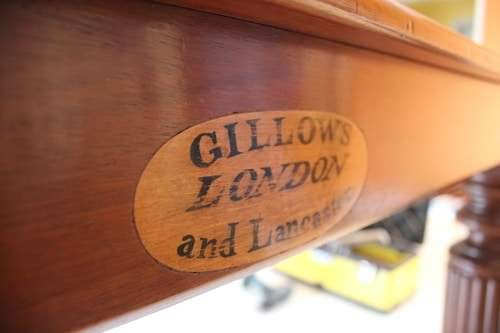 A regular client of ours approached us about restoring his antique ‘Gillows of London and Lancaster’ rollover billiard table. The client had recently needed to relocate the table and when doing so noticed that the legs had become “wobbly”.

On inspection, it became obvious how “wobbly” the table had become, in fact, the table legs were so loose that the table would gyrate in a circular motion when pushed, not ideal on a table that rotates over with a substantial weight to it.

We discovered a very fragile antique slate beneath the green baize, which was very carefully removed in one piece.


Once back at the workshop we discovered the full extent of the “wobbly” problem. The majority of the table joints had become loose due to the old glue drying out and becoming brittle. The table had been purchased at auction, often antique furniture is stored in damp surroundings and when put back into modern central heated houses it shrinks and dries out. Prior to the mid-forties, hot animal hide glue was the traditional glue used in all furniture assembly. Hot animal hide glue can sometimes be reactivated with water and heat to re-bond to itself, however, it was apparent that the glue had completely dried out.

This resulted in the entire table being fully dismantled, so we could clean up the Mortice and Tenon joints.

The biggest issue was the legs themselves. The top of the legs each had a turned wooden thread and the threaded inserts had broken. This meant that even when you tightened the legs, they would still be very loose or worse case just keep spinning. We found evidence of someone attempting to repair/restore the table previously. Two of the threaded inserts had been replaced with the incorrect thread pattern. Somebody had even attempted to fix it by wrapping layers of electrical tape on the thread!

We made the decision to remove the four threaded inserts and have replacements professionally milled by a precision engineer to replicate the tapered thread pitch of the legs.

We knocked apart the slate frame in order for us to re-glue and strengthen the main weight-bearing joints and discovered that one of the original metal plates was missing allowing the top to move laterally in the frame.

We did suggest to the client that we could fit our modern safety mechanism to the table as many of these antique rollovers have a huge weight shift on rotation and if the user isn’t careful, it could result in damage to the table or even injury to the user. This particular client opted not to modernise their table and keep the original design.

Before delivery we carefully cleaned, repaired light scratches and lightly waxed the mahogany finish as requested and re-clothed the table in a brand new traditional green baize.

The table was levelled and new wedges were fitted accordingly resulting in a fully working solid table, with handles that actually lock the playing surface in a level position, we’re not quite sure how the client was managing to play on a slate surface that rocked as you leant on it!
​​​​​​​