The history of snooker can't be understood without first mentioning its sister game "billiards", which is centuries older than snooker, which is a relatively young game. The origin of billiards is shrouded in mystery; it is a number of centuries old and was probably derived from a form of croquet played during the fifteenth century in northern Europe. The game is principally an outdoor game, which has been taken indoors, lifted onto a wooden table with a green cloth to simulate and represent grass.

The name billiards is a French derivative of 'billart' (mace) or 'bille' (ball). There is some indication that the game reached England via Spain. The original game was played on a six-pocket table with a croquet-like hoop, an upright stick and balls, which were pushed, rather than struck, with a mace (a stick with a special wooden end, which replaced the mallet).

The hoop and stick were abandoned after a while and in the 1600’s people started to use the handle of the mace, on occasion, to strike the ball. This proved more convenient, especially when the ball to be hit was near the edge of the table, and this method slowly took over. The handle was called a queue, (tail in French) and this word has changed to cue.

There is an amusing quote in 'Billiards' by The Billiard Congress of America.

'For a long time only men were allowed to use the cue; women were forced to use the mace because it was felt they were more likely to rip the cloth with the sharper cue'. (1)

Most of our information of the early games comes from accounts of playing by Royalty and other nobles but, there is evidence of it being played by people from all walks of life;

‘In 1600* the game was so familiar to the public that Shakespeare mentioned it in ‘Anthony and Cleopatra’,

The reference to 1600 by ‘The Billiard Congress of America’ is somewhat imprecise as scholars agree that the first known published version of Anthony and Cleopatra was as part of the First Folio in 1623, though critics generally agree that the play was composed in 1607-08.

And seventy-five years later, the first book of billiard rules remarked of England

The influence of the wealthy classes extended to the army and to the British Empire as their sons took up positions of influence in the armed forces. These youngsters, of billiard playing parents, who travelled throughout the empire, played an important roll in the development of modern snooker. The term snooker is reported to have been given to the game by Colonel Sir Neville Chamberlain in 1875.

In the Officers Mess at Jubbulpore in India, gambling games such as pyramids and life pool were very popular, and coloured balls, as well as the reds, were used. An English officer, who was visiting Chamberlain's regiment, explained that at the academy where he had trained, a first-year cadet was called 'a snooker', a term then used by Chamberlain when one of the players failed to pot a coloured ball. As they were all 'snooker' (i.e. novices) at the game, this name stuck, and the game with the coloured balls was always to be known as snooker. The game was later brought back to England from the Empire.

At the same time as the game was enjoyed in their homes and clubs by the leisured classes, the table game had gone from the houses of the wealthy into public houses and billiard halls where ordinary people played the game. Here it developed a sleazy reputation. Charles Roupell is reported to have said that:

"To play Billiards well is a sign of an ill-spent youth." (4)

In 1757 the game was reported to have been banned from the taverns in England, along with other pub games, due to its seedy reputation. In America, it was associated with gambling where the word pool means a collective bet or ante.

'In the 19th century, the term poolroom was a betting parlour'. (5)

Halfway through the 19th century, this reputation began to change, and in his book ‘Billiards’, Major General A.W. Drayson points out the benefits of the modern game and refers to its earlier reputation.

He also refers to purpose-designed invertible tables. This is the first reference to dual-purpose tables, which are designed to make maximum use of limited space. (6)

Billiards’ popularity was such that it was mentioned in Gilbert and Sullivan’s light opera, ‘The Mikado:

"The billiard sharp whom anyone catches,
His doom's extremely hard-
He's made to dwell-
In a dungeon cell
On a spot that's always barred.
And there he plays extravagant matches
In fitless finger-stalls
On a cloth untrue
With a twisted cue
And elliptical billiard balls" (7)

A number of games of the billiard family are played on tables, and today the most popular of these is snooker. Sometimes the term snooker is used generically and can refer to one of the other games. These include:

This seems to have been one of the earliest table games. It is played on a table with pockets in the corners and one in the middle of each of the longer sides. The balls used are plain white, spot white and red. (Fig.1) 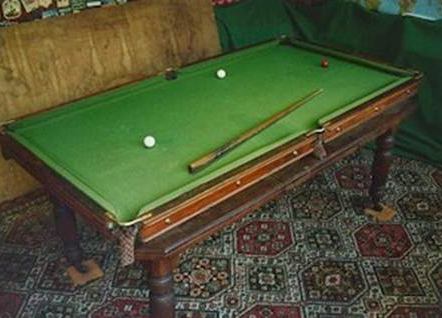 It is played on an English Billiard table. It is an eliminative game for a number of players. Each player uses a different coloured ball to pot the cue ball of the other players. The name comes about because each player lays a stake which is pooled. The winner is the recipient of the pool.

Pyramid:
This also uses an English Billiard Table. Fifteen red balls are lined up in an equilateral triangle and the players take turns to pot them.

Snooker:
This is a combination of pool and pyramid. The fifteen red pyramid balls are racked up in an equilateral triangle and the six pool balls are placed separately in their allotted places. (Fig.2)

This game is played on an English Billiard table.

There are five balls: white, yellow, green, blue and black, and the players aim to score the number of points set.

A popular game that was developed exclusively to be played in pubs where space was limited.

The table is smaller and has no pockets; instead there are holes in the actual table. (Fig.3) 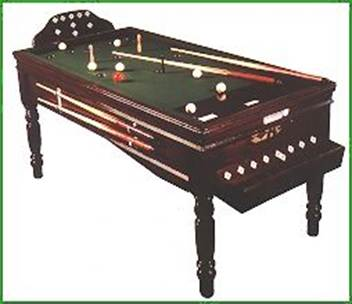 There is also a range of American Pool derivatives

If a range of tables is looked at from earlier to modern times, the first observation is that the basic designs and layout are very similar. The size is the same or similar; the huge legs, even though proportionally correct in aesthetic terms, are still a dominant feature, and their decoration tends to be ornate.

Over the life of the game, tables have reflected the dominant aesthetic features of furniture style and design most fashionable in each particular era. 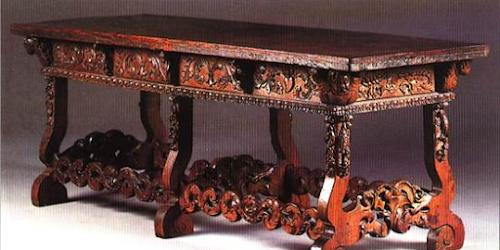 Fig. 4.A Spanish oak refectory table in which the scrolled Baroque influence is evident. The carved decoration includes bird-heads, masks and angles. The six scrolled legs are joined by pierced carved stretchers with a central cherub mask flanked by leaf-scrolls. 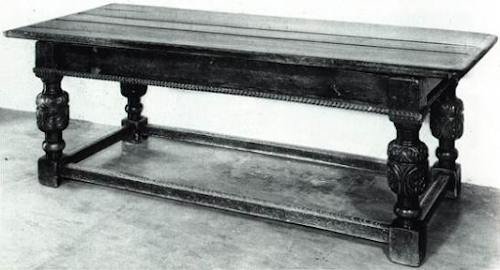 Fig. 5.This type of massive oak table is known as a refectory table, it evolved from trestle-supported boards. This mid 17th-century example has elaborately carved bulbous legs and is of massive construction. 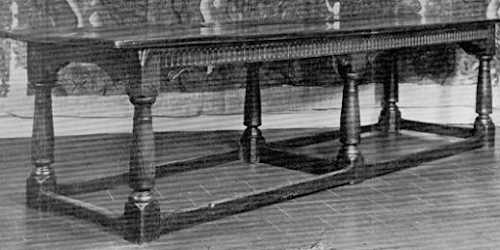 Fig. 6.Here is an early 17th-century oak joined table with fixed under framing. This is an example of the usual type of high table in great Tudor and Jacobean houses.

Our most recent pool tables reflect all these in a modern design tailored to you and your home: